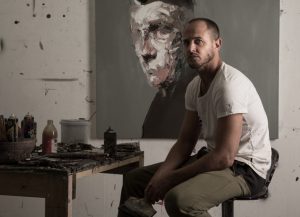 Ryan Hewett is a South African born painter living and working from Cape Town. Known for his contemporary grotesque and abstract style, he uses knifes, brushwork and paint rollers to create intriguing portraits of both, former and current characters who have influenced society as well as strangers without a name. Hewett’s work has been featured as a part of the opening of the URBAN NATION Museum 2017. 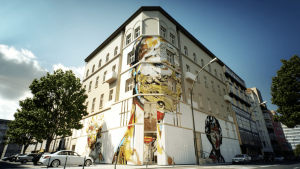 Wielding a palette knife, Hewett splashes colour, building, edging and scraping off painted layers, which he trapped in spaces shaped by masking tape. Using this technique he creates imagery that is deeply textured and richly hued. Stating that portraying someone as an artist is not showing the external likeness, but instead creating a portal to the inner journey of self-exploration, his art, which conveys both complexity and raw emotion, does exactly that. Influenced by flowing processes of memory, reams of visuals he takes in every day and his creative imagination, Hewett forms artworks that confront the viewer with an arresting energy and charisma. Hewett has presented highly regarded solo shows in South Africa, London and New York.